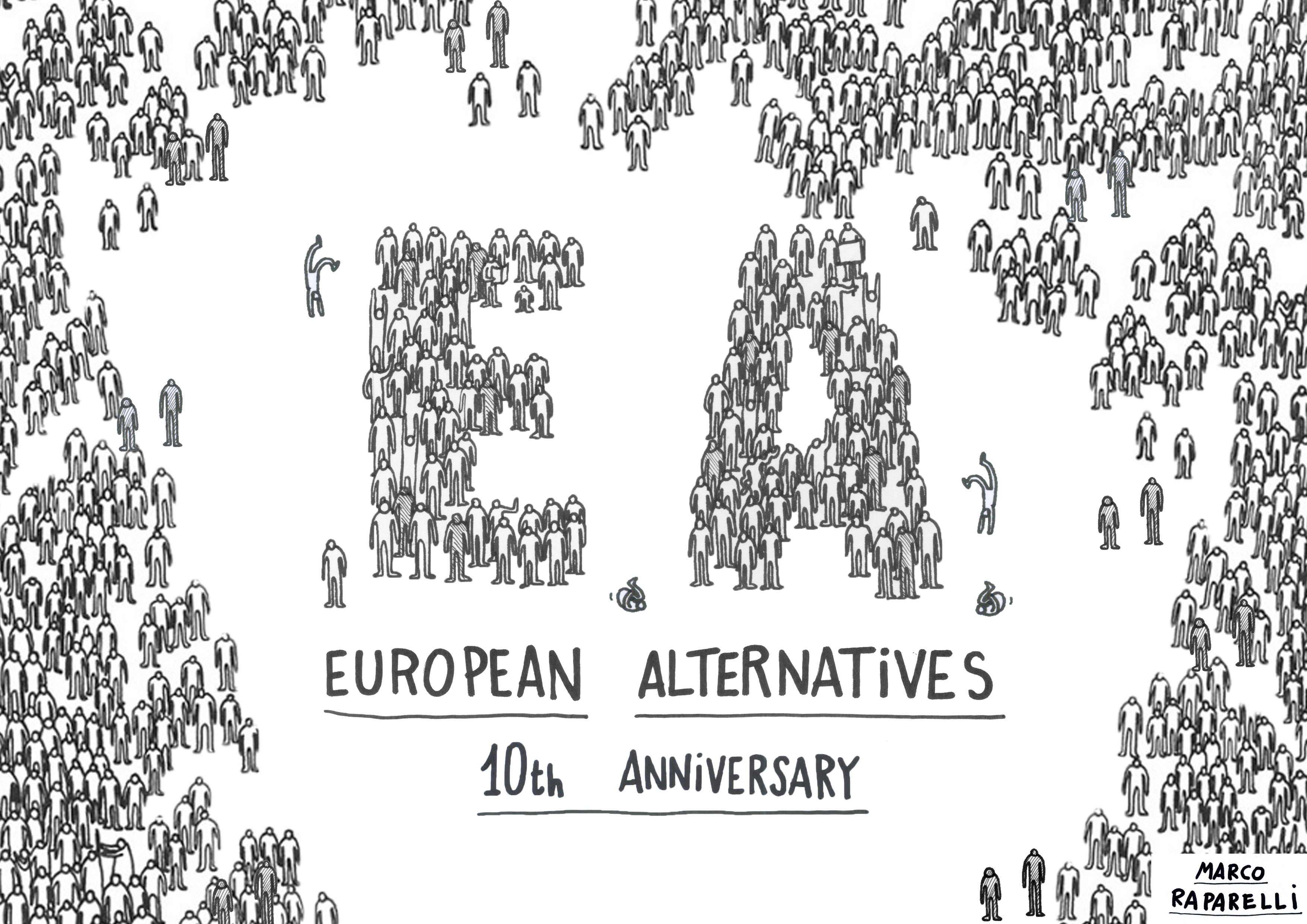 A coproduction of MAXXI and European Alternatives for The Independent

The second edition of the year of THE INDEPENDENT – the research project by MAXXI created to broaden and challenge the current limits of museum institutions and to stimulate and elaborate new ways of acting in contemporary times – is dedicated to European Alternatives, a transnational organisation of civil society and a citizens’ movement promoting the values of democracy, quality and culture beyond the nation state.

In the framework of THE INDEPENDENT, European Alternatives organises Overtime – Third Time, a project in two chapters happening over a day of debates and actions around the idea of Europe and an illustrated map by artist Marco Raparelli and dedicated to the past ten years of social movements in Europe.

The first chapter consists in a day of debates, on the 26th March, date of the 60th anniversary of the Treaty of Rome. Recognising the role arts play in social and political change, the day wants to activate a reflection of the meaning of the Union and on the responsibilities of political, cultural and artistic institutions. Never as in this moment in history, the very foundations of Europe have been questioned as much as today: Brexit, migration, financial crisis, climate change are only some of the challenges we face. Will our continent be able to face such a systemic crisis and transform its model? What is the role arts can play in imagining a way out of an out-of-control present?

Some of most interesting voices of the political and artistic scenario are invited to reflect on these issues. The aim is to put these worlds in dialogue on crucial issues like democracy, equality and culture. Some of the participants of the day are director Ken Loach, screenwriter Paul Laverty, critic and curator Maria Hlavajova, writer and MEP Barbara Spinelli, artist and Vice President of the Spanish Parliament Marcelo Exposito, artists Tania Bruguera, Cesare Pietroiusti and Jonas Staal, co-founders of European Alternatives Lorenzo Marsili and Niccolo Milanese, the artistic director of the MAXXI foundation Hou Hanru. The conversation will then be opened to the participating audience.

The time and space between debating sessions will be filled by performing actions by the Kinkaleri group presenting All!, a project of language structure in physical, verbal, visual, sound paths aimed at the development of thought in a total freedom of expression.

The second chapter of the project Overtime – Third time is a map dedicated to presenting the social and cultural movements that happened in Europe since the explosion of the financial crisis in 2007-8 until today. The hypothesis – at the basis of the methodology of European Alternatives – is that a European citizenship and a transnational demos are build trough practices of dissent, contesting and organisation beyond national borders. From European movements for refugees, to the fight against austerity policies, from the continental mobilisation for water as a common good to the struggle of women. Thanks to the sign of Raparelli, rooted in the art of comics, the map gives back the path of an independent reality that never stopped exploring and acting a different idea of Europe.

H 15.30
Ken Loach director
Ulrike Guérot Professor of European Policy and the Study of Democracy at the Danube University Krems and board member of European Alternatives
Marcelo Exposito artist and vice-president of the Spanish Parliament

The debate will be followed at 19.30 by the presentation and screening in the MAXXI Auditorium of the film Io, Daniel Blake, 2016, by Ken Loach, Palme d’or at the Cannes Film Festival, in partnership with DiEM Voice. Ken Loach will be participating together with Berardo Carboni and Danae Stratou.