Europe after Europe: the other Europe in awaiting 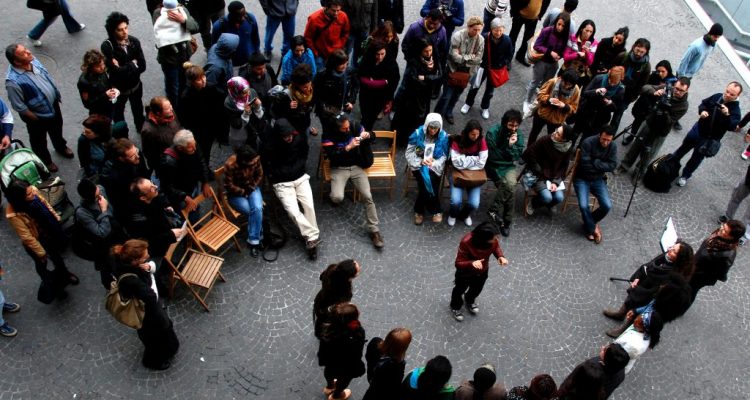 Europe after Europe: the other Europe in awaiting

There is a tendency when discussing ‘things European’ to speak almost exclusively in vertical terms, as if the question of Europe was all about the formal institutions – the parliament, the Commission etc. – the agreements amongst member states, or even the relationship between the citizens and the institutions. This tendency is particularly strong in the United Kingdom, where ‘the European question’ is indeed being boiled down to a simple ‘in or out?’ dimension. But the trend is present in all European countries and is in part the inevitable consequence of the European Union being very young and continuously under construction. We could also say that it is the consequence, in some ways, of the idea of Europe itself being captured by the European Union and its institutions in their present form.

As essential as the ‘vertical’ questions about Europe are, there are also a set of arguably more important questions which could be called ‘horizontal’ : how do Europeans relate to one another, as individuals and as groups? How do they treat each other? How do they express solidarity or conflict? How do they do things together? Refocusing on these questions seems to me an important part of constructing a Europe from below.

We know that formal institutions and elected leaders have a great influence in determining the way people relate to one another: if leaders from the north propagate the idea that people in the south of Europe are lazy, for example, or that a ‘moral’ fault has been committed in the south that needs to be ‘punished’ by austerity, and indeed if the policies of the European Union become based on this kind of premise, then it is of course more likely that people in the north of Europe will think this way of people in the south, and that social relations will change in this direction. But the attitudes and behaviours of people are thankfully not only determined by leaders or institutions, and the changes in public attitudes induced by public policies are not unidirectional.

Without speaking of civil disobedience, there are alternative forms of social organisation which can be promoted and effectively resist the logic of both the market and current institutions. Many recent examples are well known, from people’s supermarkets to Bitcoin to occupied theatres. In the context of the present crisis, many of the most discussed of these initiatives are understandably focused on economic alternatives.

There are not many examples of such initiatives on a European scale, or with Europe as a focus, even if they have been emerging, notably with regard to solidarity with migrant populations. Such initiatives would have a tough task: they would challenge not only dominant opinion, but also institutional logics as profound as the ordering of our societies according to the model of the nation state. But they would also have to take into account the increasingly ‘transnational’ dimension of our lives, social relations and outlooks, which now largely go beyond anything that could be circumscribed by one national polity. Such initiatives would not necessarily be making political demands directed towards formal institutions of democracy, but rather enact new ways of being European. The creation of such initiatives seems to me essential for the development of an alternative Europe.

Another Europe – where from?

Historically, the left in Europe has been built through initiatives such as cooperatives, working men’s clubs, and trade unions. These are some of the ways that the values of solidarity, for example, have been anchored, protected and promoted in our social fabric. If we want to build a European left, it is naïve to think it can or will be done by conquering power in the institutions. It will be done through a decade-long process of creating alternative social institutions. Holding power in the institutions may be a desirable thing to facilitate this social process – but it should be power in the long-term service of the people, and not the other way around.

As Bo Stråth and many others have argued, the reinforcing and the politicisation of the European Parliament are essential components of creating a functioning European public sphere which allows for the feedback between the representatives and the represented to function correctly.

At the moment we have a situation where the national public spheres in Europe reinforce national divergence and competition through a well-established feedback loop between national public opinion and national leaders, which is rushing us towards forms of nationalist populism. A European Parliament which found its place in the institutional system of Europe would interrupt this national feedback loop by introducing a European perspective focused on the European common good. But a functioning European Parliament in this sense cannot be created by fiat. Nor can genuinely trans-European political parties, which would incarnate competing visions of the European common good, be created by the elites or by recomposing national political parties into ‘groups’ at the European level: the creation of political parties will be based on and emerge from the structuration of people’s movements in European society, through social initiatives. Forgetting this anchoring in the fabric of society – it seems to me – is part of what many people are getting at when they say that political parties seem increasingly disconnected from everyday life and seem only to represent professionalised politicians or hidden interests. The current ‘European’ political groupings seem only to accentuate this feeling.

It is also possible to resist dominant logics in everyday actions as simple as the way we interact in social settings with others, behaviour that we accept and behaviour that we condemn, the jokes we repeat or refuse to laugh at… All of this is well known and quite obvious to many of us from other experiences: more or less successful battles have been won by progressive forces to change social behaviours when it comes to gender relations, for example, or race relations.

This dimension of creating Europe, creating Europe also through the manners of its people, is almost totally absent from public debate. It is there, arguably, that we are potentially strongest, for a significant part of the population of Europe is already outraged, indignant indeed, by social injustice, corruption, lack of media freedom, contravening of fundamental rights and so on in Europe. We need to have the courage to say that it is in the name of Europe that we find the current political and social situation unacceptable.

This dimension of creating Europe, creating Europe also through the manners of its people, is almost totally absent from public debate. It is there, arguably, that we are potentially strongest, for a significant part of the population of Europe is already outraged, indignant indeed, by social injustice, corruption, lack of media freedom, contravening of fundamental rights and so on in Europe. We need to have the courage to say that it is in the name of Europe that we find the current political and social situation unacceptable. Then we may be a step away from saying that in the name of Europe the current form of the European Union is unacceptable.

The dimension of manners, the dimension of ‘civilisation’ as we might call it following Norbert Elias, is arguably absent from the public debate in Europe because of the pervasiveness of the dogma that the European institutions were created by the elites, often in spite of the people.

In a sense, this is true – after all, the founding fathers of the European Union worked to create the coal and steel community often against popular sentiment after the Second World War, which was still highly recriminatory regarding former enemies. The problem with this dogma, however, is that its repetition and internalisation reinforces the ‘vertical’ nature of the European Union and totally disregards undercurrents in European society – in the manners and customs of the way people relate to one another in Europe – that made such a project socially possible, even in the aftermath of the greatest catastrophe of European civilisation. If we ignore this legacy of customs and manners of humanism in Europe, then the only societal enabler which makes the European Union seem viable as a project since 1945 is the promise of (ever greater) wealth. Regardless of whether such an objective is good, in the current context of crisis and provincialisation of Europe, it is not convincing.

A part of the left is highly reluctant to do or promote anything ‘in the name of Europe’ or to have recourse or reference to Europe’s cultural, literary and humanist past because the name of ‘Europe’ itself is tainted with colonialism. The appearance of forms of neo-colonialism in countries experiencing austerity programs in Europe at the moment reinforces this narrative. The narrative and the critical approach are both justified and to be taken extremely seriously. But on their own they are insufficient to produce a form of political subjectivity which is constructive as well as oppositional. The constructive side of these thoughts is for us in Europe, I believe, inescapably European: and if it is not, our promises of progress will always relate to elsewhere, whilst in our own backyards social justice is abrogated.

A part of the left is highly reluctant to do or promote anything ‘in the name of Europe’ or to have recourse or reference to Europe’s cultural, literary and humanist past because the name of ‘Europe’ itself is tainted with colonialism. The appearance of forms of neo-colonialism in countries experiencing austerity programs in Europe at the moment reinforces this narrative. The narrative and the critical approach are both justified and to be taken extremely seriously. But on their own they are insufficient to produce a form of political subjectivity which is constructive as well as oppositional.

On the table of the philosopher Jan Patocka at the time of his death in 1977 was a text called ‘Europe and Post-Europe. The Post-European epoch and its spiritual problems’ (not published in English) in which he outlines a post-European philosophy for Europe, which is based on taking full responsibility for the harm and crimes caused by Europeans and European inventions. Leaving aside the spiritual aspects of Patocka’s thought, there is much to be gained in taking seriously the idea that Europe is inescapably European and linked with Europe’s historical and cultural past.

Europe will be constituted as it continuously exceeds itself, going beyond its horrors and its failings. As such it is a humble project, which cannot be too dogmatic in its opinions, cannot be overly sure of itself or closed to debate and contention. It is tied to a process of cultivation and education which must constantly guard against the risk of becoming domination. In the context of the European crisis, Europe has tried to make itself too rigid and closed as a cloak for its perceived weakness as an institutional system, thereby ignoring its real strengths (which are in its people, their intellectual, emotional, social and cultural skills). ‘Re-foundation’ might be too strong a word for the Europe-after-Europe if it is meant to be too decisive or final, and it also risks suggesting that an alternative Europe is not already with us: maybe it would be better to talk of the need to provoke an ongoing European awakening.